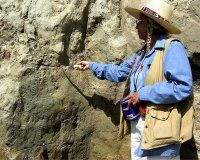 Return to The Pleistocene Coalition homepage

My new website <http://www.valsequilloclassic.com> is under construction with a new webmaster, yours truly!  John Feliks has kindly offered me a web page on The Pleistocene Coalition website where I can post important items that have vanished from three of my former websites. Many thanks, John!

For those of you new to the Valsequillo Saga, I'll start off with a couple of popular articles by way of introduction, followed by a list of critical references. Here also are the unpublished trench profiles from the Hueyatlaco archaeological site, and select photos by Hal Malde (2004). Soon I hope to add Roald Fryxell's b/w photos of the trench stratigraphy at Hueyatlaco (1973) and links to unpublished Hal Malde material.

Armenta Camacho, J. 1978. Traces of Human Workmanship on Bones of Extinct Animals from Valsequillo, Puebla, Mexico. Translated into English from the original Spanish by Virginia Steen-McIntyre (September 1996 - February 1997). [NOTE: This is the text only. For the figures, see the original Spanish monograph above.]

Following are the Hueyatlaco trench profiles available to the “Classic” Valsequillo project as of October, 2005. The bulk of Irwin-Williams’ data, including her original profile drawings, had been removed from her files in Portales, New Mexico before Steen-McIntyre had a chance to copy them in 1997. The original INAH profiles have not been located. The original Fryxell profiles are archived, along with copies of other pertinent Valsequillo data, in the Harold E. Malde file, Field Records Library, Central Regional Library, U.S. Geological Survey, Denver, Colorado.

The trench profile drawings shown here were transferred to computer by Steen-McIntyre using Adobe Illustrator, with the available profile copies used as templates. The work extended over many months, from June 2004 to October 2005, and was a learning experience for her. Irwin-Williams’ profile 1966 10/B-J and INAH profile 1966 66-4  were traced from copies she gave to us (Malde, Fryxell, Steen-McIntyre) shortly before we left for field work at Hueyatlaco in 1973. Her profile 1964? 8?/B-YY was pieced together from 8.5x11 sheets (exact location not given) found in her extant Portales materials. Grateful thanks to Chris Hardaker, who recently uncovered the sheets for the eastern half of the profile while looking through her data. The 2004 Waters profile is a copy of an interim drawing by Waters, made by me in the field. It is included only to show placement of the samples I collected during excavations at Hueyatlaco in May, 2004.

The Fryxell profiles were drawn primarily from a series of annotated blue-line prints provided to Steen-McIntyre by Roald’s widow, Helen, in 1977. Only recently did she discover that the originals were at the U.S.G.S. offices in Denver, and Hal Malde kindly provided sharper copies of them.

All profiles were carefully transferred to computer. Contact lines were traced at a magnification of 1100 per cent for the most part. The bedding units in the lower  trenches (includes those containing artifacts) were identified by Irwin-Williams on her profiles, either by label or pattern overlay, and were the standard to which Fryxell sheet 4 and Waters’ interim profile 4-extension were compared when correlating beds and adding the color overlay.

A word here about trench profiles, especially the Fryxell series.

Trench profiles are accurate, vertical drawings of the sedimentary layers encountered at an archaeologic site during the process of excavation. They preserve the record of the stratigraphy of the site; a record that can be used by future researchers after the site itself has been reduced to a backfilled cavity.

At the beginning of the first season of excavation, a bench mark is chosen and the site is surveyed. A horizontal grid is established, usually at metre intervals, and the grid lines are identified in some way.  Excavation usually takes place vertically in blocks controlled by the placement of this horizontal grid. The vertical walls that form around the sides of the blocks as the material within them is removed show in cross section the layers of sediment encountered, the sedimentary beds. They provide the raw data for the trench profiles.

Periodically excavation work is halted while the scientist in charge, after previously scribing the bedding contacts directly on a newly exposed trench wall, transfers the information to a large sheet of graph paper. Sedimentary units of interest are labeled in the field with a number or letter, and the position of any archaeologic or geologic feature is carefully measured and drawn to scale. A surveyed grid of strong twine, attached to the vertical wall with long nails, guides the transfer. A series of such profiles is drawn as the excavation continues, often spaced only a metre apart. The annotated profiles are later reconstructed in the office or on computer to form a three-dimensional picture of the site.

The “Classic era” Hueyatlaco trench profiles shown below were originally drawn in 1964?, 1966 and 1973. Site archaeologist Cynthia Irwin-Williams provided us (Malde, Fryxell, Steen-McIntyre) with a copy of her 1966 profile 10/B-J in 1973, shortly before we left for new work there. The plan was to use this profile, in which she identified her bedding units, and her survey datum point to tie our planned excavation in with hers. This we were able to do (see join lines, Irwin-Williams’ 1966 profile, Fryxell sheet 4, Waters interim 4--extension).

Profiles on Fryxell sheets 1 through 4 were drawn in 1973 by Fryxell assisted by Steen-McIntyre. Each dashed line represents an actual bedding plane, and shows in cross section the ground surface as it existed just prior to the deposition of the sedimentary layer immediately above it. Periodically over the years, erosion would remove portions of the bedding units, then the sequence of deposition would begin all over again. These “breaks” in the sedimentary sequence, which actually represent periods of “lost” time, show up as lacunae , some quite distinct, between the two series of beds. (Sedimentary beds are most easily recognized when a newly exposed trench wall is allowed to dry naturally for a day or two undisturbed. Then, the sandy beds will appear lighter in color than the clay-rich ones, and natural cracks, or parting planes, will develop along the bedding planes.)

When examining a trench profile, Fryxell first concentrated on the bedding planes at the bottom and top of a sedimentary unit of interest rather than the unit itself. This enabled him to recognize the unit, deposited during the same time period, by its various sedimentary facies: for example, a deposit of overbank sediment from a flooding stream will grade from sand to silt and finally to clay as one moves away from the ancient stream channel. This is what we found for the uppermost sequence of the  upper channel deposits exposed in Irwin-Williams’ Hueyatlaco trenches, the ones labeled “sand grading to clay” on Fryxell sheet 4.

Following excavation in 1973, a series of stabilized columns of undisturbed sediment from the trench walls ("monoliths") were collected. Their locations are shown on the trench profiles, and their appearance in a series of photos and brief notes taken at Midland, Texas in 2002, when the packing crates were finally opened.The photos and notes are located in the Hueyatlaco 1973 file, under "Hueyatlaco 1973 monoliths, Monolith photos."

Above left: Fryxell and frost cracks; Above right: Fryxell and Marmes model.
Click on images for enlargment, then once more for very sharp full size.

Above: Irwin-Williams' trench at Hueyatlaco where it intersects with
1973 trench. Click image for enlarged view.